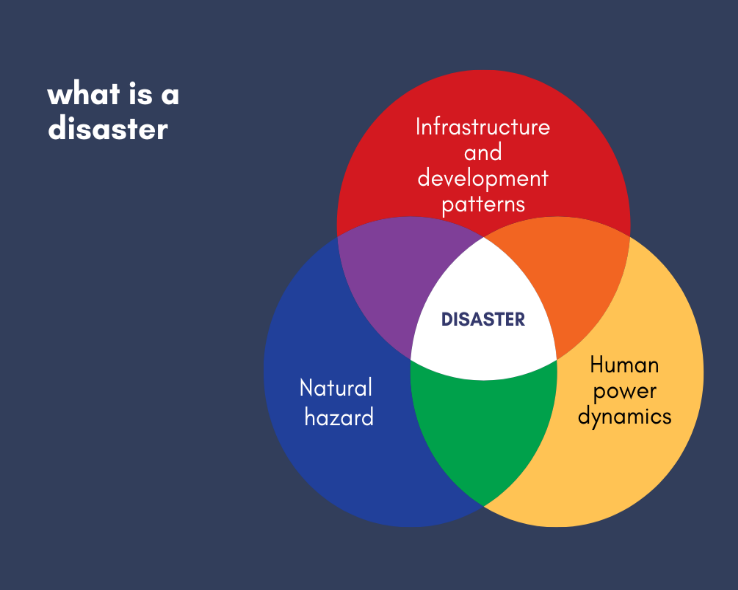 What is a disaster?

This website offers guidance on how to protect communities from a range of disasters.

The term “disaster” is usually used to describe a sudden event that harms lives, livelihoods, and overwhelms a community. At times, the term is used to describe purely human-caused incidents like industrial explosions, mass shootings, and acts of terror. However, disasters most often refer to events that occur with natural phenomena, such as an earthquake. Natural events, like earthquakes, are only disasters when they interact with human decisions about housing settlement and infrastructure development. For example, low-income communities are often sited in areas more prone to flooding without being built to withstand high water.

These natural events that become disasters are the focus of this website.  Climate change is aggravating natural hazard risks like extreme heat and flooding and making conditions worse.  A key component of reducing disasters is adapting to and mitigating impacts of climate change, such as building earthquake-safe housing and reducing emissions.

The Community Powered Resilience Program is focused on covering disasters that are common risks in California, including wildfires, earthquakes, extreme heat, flooding, and health pandemics.

Some disasters, such as drought, are considered “chronic” or “slow” disasters, as they occur on a constant or recurrent basis and do not have a concrete ending.  Slow disaster examples include droughts, sea-level rise, desertification, and poor air quality.

Disasters that are sudden and abrupt happen with little to no warning and include wildfires, earthquakes, and storm surges. These events require advanced preparation to protect communities from their impacts, even when it is hard to predict exactly when the disaster will occur.

Multiple disasters at once

Disasters do not happen in a vacuum. Multiple disasters can happen at the same time. For example, during the COVID-19 pandemic, communities have had to consider the need for wildfire evacuation shelters that allow for physical distancing. Unfortunately, there will likely be more simultaneous disasters in the future. It’s common for frontline communities to be in the middle of recovering from one disaster when another one hits. Local governments and community organizations are not set up to support overlapping disasters. Funding is needed to put systems are in place to manage overlapping disasters in the future.

It’s also important to take a multi-hazard approach when creating plans, policies, and resilience goals. For example, instructing people to live away from the water might put them closer to a fault line. Consider all possibilities and make recommendations accordingly.